The Future of Scots project held a workshop with representatives of various media outlets, from radio, through newspapers, to social media, to look at the presence of the language in the media. The workshop gave rise to fruitful discussions, not only about the issues surrounding the place of Scots in the media nowadays, but also to potential solutions to these issues. Our starting point was the public survey of attitudes towards Scots, and the answers to the following prompt: There should be more provision for Scots in TV, radio, and newspapers. 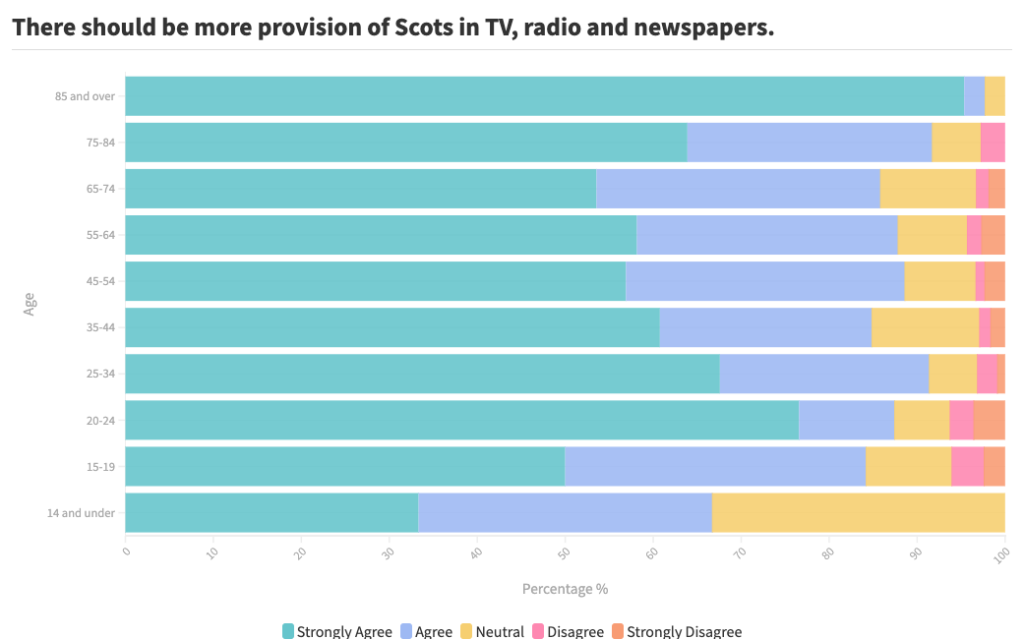 The 1616 self-selecting respondents were overwhelmingly in favour, across all age groups.

From the discussions, it was clear that there is a need to treat Scots as mainstream and de-politicise its presence in the media. It is important to create opportunities for engagement but efforts should be placed on pro-active and positive attitudes, as it is energy- and resource-consuming to respond to all negative reactions to Scots in the media, often willingly uninformed and destructive. Going forward, it would be beneficial if the media helped to take Scots out of the traditional boxes, such as “working class language”, “good for comedy or banter”. Despite an interest from young and enthusiastic future radio presenters in using Scots, national radio providers are putting a stop to any potential bigger projects in the language. In order to support regular broadcasting and publishing in Scots, there is a need to support people to make those programmes in the first place. Issues relating to the language itself were also discussed, for example, the balance between using Modern Scots vocabulary and more traditional vocabulary, and the notion of authenticity. It looks like the media sector would welcome practical guidelines and solutions, for example a 1-page stylesheet containing basic facts about Scots.