Our final workshop, led by Jack Capener (Oor Vyce), dealt with Scots, policies, and the government, and we were joined by a range of stakeholders involved in policy-making on the national as well as institutional levels. We based the discussions around the results of our survey where the 1616 self-selecting respondents were given the following prompt: The Scottish Government should do more to promote and protect Scots. These are the results by age group, and we also discussed the open text comments. 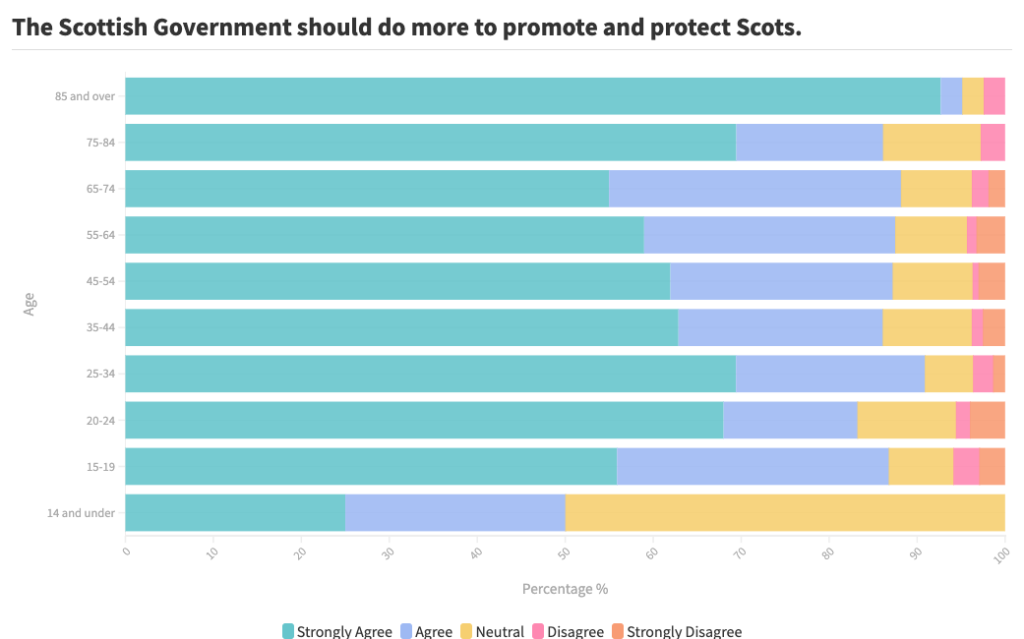 Numerous points came out of the discussions. One is the importance of depoliticising the Scots language, as it cuts across regions and political affiliations. It is a positive sign if one party is committed to the support of Scots, but the benefits would be greater if the support was expressed across the political scene. The participants therefore said that collaborative approaches such as the revival of the Cross-Party Group on the Scots language are a welcome development. There is also a need to move away from the view that Scots is a slang or a dialect, or indeed a once-a-year token of Scottish culture, rolled out for Burns Night. Instead there is a need to raise awareness and support the language in other contexts and across all ages. It was also agreed that, while not everything is about legislation, the official recognition of Scots through a language act would be beneficial and could contribute to changing the detrimental attitudes towards the language.

Next on the agenda is the Future of Scots’s final symposium in February 2023.