The next workshop organised by the Future of Scots project was with representatives of the creative industries such as literature, music and performance. Beginning with the survey results, the prompt There should be more support for use of Scots in arts and culture obtained replies largely in favour, across all age groups of the 1616 self-selecting respondents: 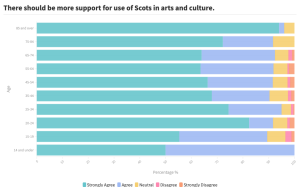 Our workshop participants represented different types of involvement with Scots in the creative sector: from writers and publishers, through performers, to representatives of national organisations for the promotion of the arts. Through the talks, several themes were addressed: the place of Scots in contemporary arts, official bodies for the support of Scots and education, as well as the creative industries representatives’ experiences and emerging issues.

The discussion led to several agreements about Scots. One of them was that Scots is not only traditional but that it is also contemporary and has its place in all creative domains. The importance of parity not only with Gaelic, but also and mostly with English, was stressed in the discussion. There is also a need to raise confidence and to support creativity in Scots, and the awareness that it is a valid means of creative expression. One way of doing so would be to have more official support for the Scots language and also an increased place for Scots in schools.