Dr Joanna Kopaczyk is Senior Lecturer in Scots and English at the University of Glasgow. She is a historical linguist and has presented and published extensively on the development, features and contexts of medieval and early modern Scots. She’s Chair of the Forum for Research on the Languages of Scotland and Ulster and Academic Officer of Oor Vyce.

Professor Bernadette O’Rourke is a sociolinguist who works on minority languages, multilingualism and language policy. She has worked extensively on language revitalization across Europe with a focus on ethnography of resistance, language ideologies and language activism. She was the leader of an EU COST Action (IS1306) New Speakers in a Multilingual Europe: Opportunities and Challenges. The New Speaker Network now has over 300 members across 28 countries.

Jack Capener is a practitioner of Scots language activism and Political Officer of Oor Vyce, a civic association campaigning for the statutory recognition of Scots. He led the successful campaign for the Scottish National Party (SNP) to adopt proposals for a Scots Language Board as party policy at the party’s Autumn Conference in 2019. 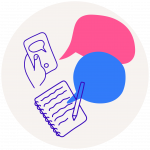 Thanks to Emer Tumilty from icecream architecture for providing illustrations and graphics.